In the US, the annual expenses associated with the problem of pain reach about $ 600 billion and are higher than the funds allocated for the fight against heart disease, cancer, and diabetes. The fight with pain is mainly focused on pharmacological treatment – the use of opioids. 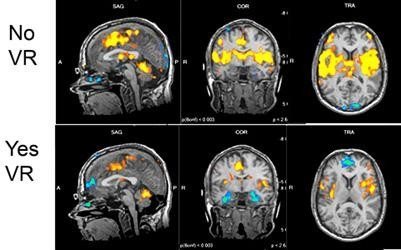 These images from an fMRI scan show areas of the brain affected by pain, and how they shrink when the patient is immersed in a virtual reality world. (Dr. Sam Sharar/University of Washington)

I think there is no person who had not suffered from unbearable pain. Yet, we often think of a sudden pain as the result of an event or caused by a conscious decision (a visit to the dentist). However, it appears that in both cases of pain, the sudden and the chronic one, the experience the virtual reality (VR) may be very helpful. How?

The treatment of pain by VR is one of the first non-military applications of this technology. The idea had already appeared in the 90s of the twentieth century. Although at the beginning of the separation (military-medical), the scientists focused mainly on the traumas and fears.  In 1997, they chose the direction to fight against pain. Pain and its taming became a serious problem that is worth the highest attention. The first major project was to create a simulation SnowWorld which, since then, has been used successfully in the treatment of pain in cases of serious burns. When it turned out that the experience of VR can effectively divert attention from the suffering (feel the pain as much lighter), scientists had a scientific basis to continue and develop their research.

Howard Rose, CEO at DeepStream VR, has been dealing with the influence of VR experience on pain for over 10 years. He was one of the pioneers who isolated this technology from the military context. During one of the interviews, he said that pain and its derivatives (anxiety, fear, frustration) constitute one of the greatest challenges of medicine and virtual reality.

He says that stress has an influence on the way we feel pain. It is not just the nerves that transmit signals to the brain, but also the brain itself has an impact on the degree of pain sensation. To cope with this feeling, you can make your brain pay attention to something else than pain only.

In his study,  Rose used the fact that the brain has a limited capacity for transferring information. Thus, if we make our brain focus on something other than the experience of pain, there will be less space for pain sensation. Consequently, the pain will be perceived as lighter. Another explanation, but not yet scientifically proven sufficiently, maybe the fact that during the immersion in the virtual world, endorphins are secreted, which effectively masks the pain. Although it is only a hypothesis, it is very likely to be resolved in the near future.

And so the feeling of anxiety is replaced by immersion in a virtual environment. You are in a different place, so the feelings associated with a stressful situation or place disappear. You do not lose the feeling of control; it is because while being in the virtual world, we are active and we have the ability to control the situation. By focusing your attention on the experience of VR, you automatically leave less space for pain.
There was also a fundamental conclusion: the quality of the experience is important. The extent to which we are able to immerse ourselves in the virtual world and devote most of our attention to the experience of the inner world has an impact on what percentage of the attention we devote to another experience, in this case, the pain. It is worth mentioning that the applications that were created with the participation of Rose were produced as a resultant of a multitude of tests and long-term experiments on this subject, with the participation of an outstanding team of scientists. What is important, says Rose: “VR pain research has helped us better understand the mechanisms and the phenomenon of virtual reality. So pain has given us a way to understand VR, as well.”