Creating a Buzz at Tradeshows 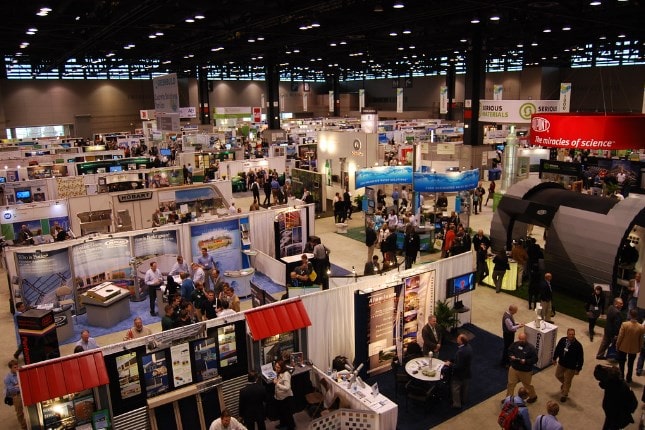 More and more companies are using VR as a means to promote their products and services and one of the best places for promotions is at tradeshows.

For companies that have product too big or complex for users to get the full experience, VR in the form of a Kiosk can be a great addition, time saver and excellent marketing tool to showcase just what the company is capable of producing or rendering.

Headsets like the Oculus Go already have a Kiosk Mode. A Kiosk mode locks the headset into a demo mode with a single application and some applications even have hands-free control functionality. This is practically great for a tradeshow style environment.

VR Kiosk – get the right attention

In marketing, you have the classic acronym AIDA. It stands for attention, interest, desire, and action. The first thing you want to do is get your audience’s attention. You want to stand out. One way to do that is to let everyone know that you’ll be bringing a Virtual Reality Demo. Virtual Reality is still an emerging industry and by developing a VR product you’re going to pique the interests of those around you.

Virtual Reality enables you to do something very important. In the context of the trade show, your audience is bombarded with thousands of sales pitches. So in order to stand above them, you need to create a lasting impression. A fancy promo video isn’t enough anymore. You need to give your audience a multi-sensory experience that engages them on a level that no one else is doing.

Topics are often complex and difficult to communicate, especially at a turbulent trade fair booth. You need very good sales personnel to be well prepared. With VR, you can counteract this communication challenge very smartly by creating a digital & interactive 360° learning world. The customer dives directly in and gets everything presented up close and in 3D. Quiz questions help them to engage.

In short, interactivity turns them from a mere spectator to an active participant. Worldwide (or perhaps even universe-wide) teleportation! Transport your visitors to other places such as your company headquarters or the middle of a product presentation. There are no limits to your imagination. You can even travel to fictitious places. All this and more from your exhibition booth. How about Time travel? Why not! Here, however, the challenge is portraying the past or predicting the future.

Take for instance Sage Gateshead, it’s a concert venue and also a center for musical education, located in Gateshead on the south bank of the River Tyne, in the North East of England. It opened in 2004 and is tenanted by the North Music Trust. The VR demo transformed the iconic UK concert hall into a playable 3D instrument in a new app built by in collaboration with Atomhawk Design.

The demo allowed users to enter a digitized version of the Sage Gateshead concert venue to bash walls and beat floors to create a percussive music track. The demo was developed as a way to celebrate their 10th anniversary. It helped Sage Gateshead connect their audience and spur further donations for the center.

Kiosk mode means starting your own app on VR glasses (the glasses boot with the app). With this mode, customers can no longer “break out” of the app. Your app is simply installed on the glasses in advance and with gaze control function, you have a completely idiot-proof use of your VR glasses.

This way, you make sure that the customer doesn’t end up in other apps or menus that they shouldn’t see. Some  examples of glasses currently support kiosk mode include Pico, Oculus GO, and HTC VIVE.